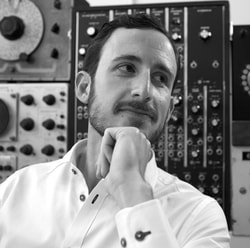 ​Adam got his start in the world of music recording at the turn of the century. His studies at The Harris Institute for the Arts ultimately led him to collaborations with touring keyboardist Jamie Shields and vocalist David Wall. In 2004, the group formed a company known as StudioCat, and have been composing original music for TV and film under the moniker ever since. Their body of work has garnered critical acclaim and can be viewed at StudioCat.ca

With the technical background in place, and a fast growing demand for audio services in the Toronto area, Adam answered the call and hasn't looked back. In addition to his talents capturing sound on set, he has a real knack for repairing your rumbling recordings and fixing your mix. Scoring to picture is still his passion numero uno. His complete imdb profile is up to date.

"Bloor Street Sound is the best in the city. I love working with Adam and will hire him every chance I get!
- Jane Motz Hayes
Producer, Berkeley Films

“Adam is a consummate pro and a pleasure to work with. Whether it’s on the Location Sound front, or his mixing and sound design, he helps bring our productions to the next level. It also just so happens he’s a swell guy who clients get along well with to boot.”
-Paul Matthews
Producer, Maple Leaf Sports and Entertainment